Curated by Ingrid LaFleur from Detroit, “Beware of the Dandelions” is an Afro-futuristic exhibition currently on display at Goethe on Main in the Maboneng Precinct, Johannesburg. The concept was conceived by the Science-Fiction-meets-Hip Hop collective from Detroit; “Complex Movements”. It is a multimedia ensemble integrating photography, song-writing, graphics, video, music and text. “A beautiful flower wild and yet divine” (I stole these words from a popular 90s RnB song), as a child I marvelled at Dandelions:  I wondered why they were labelled wild flowers when they were simply ‘furry-flowers’. I fascinated over their delicate and convoluted structure when intact before breaking into independent entities just as poignant. Where would they land? Did they fly consciously and deliberately? The exhibition linked my nostalgia with a mutual philosophy of harmoniously living with and drawing from our Earth’s eco-systems along with the development of art communities and structures aimed toward societal transformation.

The objective of “Beware of the Dandelions” is to: “REFLECT on the ways we approach the work of transforming ourselves, our communities, and the world. ENGAGE in conversation about networks, new forms of organization and leadership, drawing lessons from quantum physics, emergence, and other complex science theories. REDEFINE change from critical mass to critical connections, from growing our economy to growing our souls, from representative democracy to participatory self-governing communities (and) CONNECT communities working for change within Detroit and Grand Rapids to one another and to communities around the world” and is gaining momentum globally at challenging new thoughts and ideas aimed toward refining our quality of living.

Ingrid’s desire to exhibit in South Africa was prompted by parallels she identified between the socio-political and art landscapes of Detroit and Johannesburg in spite of each city’s raw appeal.  She said Joburg’s diverse audience showed exceptional curiosity. Granted, some visitors struggled to find correlation between the different art mediums and how their ostensibly varied themes tied together; a confusion that she quickly cleared through a guided walk-about through the exhibits.

Through her work, Ingrid wishes to incite consistent training, innovation and more verve among artists as the three are crucial for growing mediums of expression. Inherently these mediums may be applied to confront daily societal ills such as discrimination, segregation and gender inequality while inversely growing cultures of cultivation, scholarship and sharing. In this way the Dandelions metaphorically blew across the oceans to impart revolutionary seeds to an uncharted environment abound with fertility therefore, disseminating and intensifying connections.

Joburg prides itself as a hub of potentially flourishing opportunities for cleverly-planned and researched artistic niches. These niches are steadily blossoming into an incubator of knowledge and learning for visitors from neighbours such as Lesotho, where I am from. It is encouraging that exhibitions like “beware of the Dandelions” are being imported from overseas: the farther the message reaches (outside of the World Wide Web) the closer we will get to synchronising and harnessing new disciplines.

This multi-media revolution can set off a tradition of artists applying scientific and other approaches to represent their ideals and militancy. It can inspire a matured discipline that is easy to adopt and creations that are almost immune to becoming watered-down versions because so much study, intellect and personal involvement go into them. “Beware of the Dandelions” summons our attention to the minute details that our existence and eco-systems rely on such as ants: the ant symbolizes vigilance and robust labour compelled by a unified instinct for survival. Ants collaborate and make do with their numbers to successfully gather, build and sustain. The same moral if adapted by human beings can uproot injustices, promote peace on our war-torn planet and arouse a more nurturing attitude toward the environment and the lives dwelling within it besides our own.

Although the exhibition at Goethe is modest in comparison to those on-going in the U. S and elsewhere, it is just as powerful and edifying. It reaches into the visitor and motivates him to think about his role beyond his immediate surroundings. One is forced to think about one’s self as an integral piece composed of love and altruism within the framework of existence, two attributes that are light enough to flow with the wind and reach faraway places without much effort, like Dandelions. I especially admire the name “beware the dandelions” because we pay Dandelions little thought beyond our adolescence and yet through the exhibition they are piously transporting revolutionary seeds that hone creativity, boost unity in diversity and serve as weapons of mass-construction. Hip Hop entwined with Science-Fiction, so exquisitely presented at that, just imagine the odds! 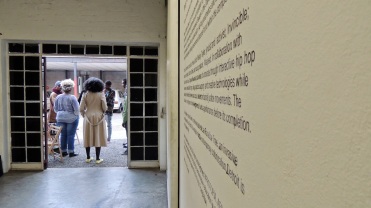 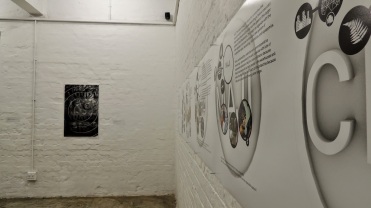 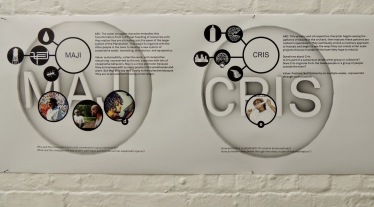 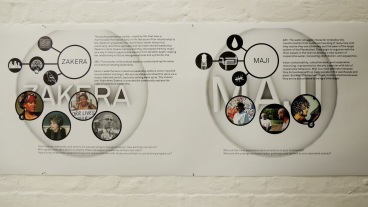 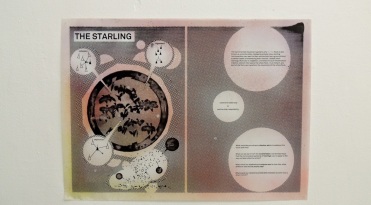