On Saturday 10th December, a group of seventeen members and volunteers of The Hub travelled to Maseru to spend the day at the 2016 Ba re e ne re Literature Festival. We had a wonderful day of listening to inspiring talks and discussions. We also had the chance to meet writers and guest speakers from different countries. Here is what our members and volunteers had to say about their experiences of the Festival:

“I learnt many important things at Ba re e ne re. In order to be in a good position to write, one must first be in love with reading and then writing will follow. Sindiwe Magona told us that we come to the world bearing gifts from God. If one hears a whisper in his or her heart that says: “write”, it’s a reminder of the gift you came bearing to the world.” — Ts’episo Mahooe

“Ba re e ne re Literature Festival was founded in 2011 by Liepollo Rantekoa. She wanted to improve her community by providing libraries for people who had no access to books. I enjoyed the talk about decolonising our literature. We should write books in Sesotho for people and teach them how to read, write and speak Sesotho. We should also pray in Sesotho. I also liked ‘M’e Sindiwe Magona’s talk. She told us that we can be successful even if we come from poor backgrounds.”  — Tsebo Makakole

“This year, Ba re Lit Fest included the launch of a book called Likheleke Tsa Puo, which was written by group of Basotho writers. This session inspired many authors to write stories and never give up on their talent. At the Festival I also learnt that voice is very important in stories, in order for the story to sound different from all other stories.”  — Thabo Mohloboli

“Ba re e ne re was very helpful to me, because I used to feel very insecure about my work. Now I know that writing is about finding a good theme and creating images from it. Like Joe Machina says, it’s confidence that will take us far as young writers. Before the Festival I felt stupid, but now I know that I have to trust myself. I now believe that I am good at everything that has anything to do with literature.” — Mpho Semethe

“Ba re e ne re made me believe that I can be a professional writer and poet. Joe Machina and Liatile Mohale told us that it is important to believe in our language and our culture. Sindiwe Magona said that we owe it to ourselves to write. She further explained that if we want to write, we have to start by reading. I learnt that you should never lose hope when your manuscript is not accepted, as some of the best writers were rejected many times before they were accepted.” — Liteboho Molato

“I was very inspired at this year’s Festival, especially by the discussions around decolonisation and Lesotho’s legacy of literature. For us to decolonise our literature, we have to start loving our culture and be proud of it. In the discussion about Lesotho’s legacy of literature, I learned that we have to write books that are relevant to our times. I liked the keynote speech by ‘M’e Sindiwe Magona, who is a living legend in the history of writing. She said that anyone can be a writer, as long as you have the passion for it. I also liked that we were able to talk to writers like Ace Moloi and Tumelo Moleleki during the breaks: they were able to motivate us.” — Selebalo Molefe

“I really enjoyed the talk by Sindiwe Magona. She advises people to find their own voices. People have different talents: some are poets, while others are actors. We must use our talents to succeed in life. Sindiwe Magona said that good moments come from being patient. Hard work has its reward at the end. I have learned that it is possible to succeed in life if we listen to our own voices, follow our dreams and believe in ourselves.” — Lebohang Mohola

Special thanks to Selibeng sa Thuto Trust for funding the trip for members and volunteers of The Hub to attend Ba re e ne re Literature Festival. 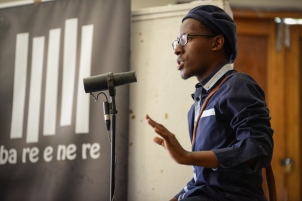 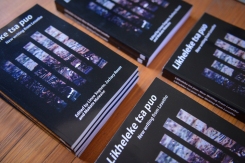 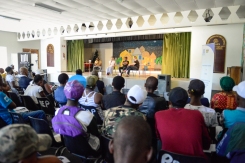 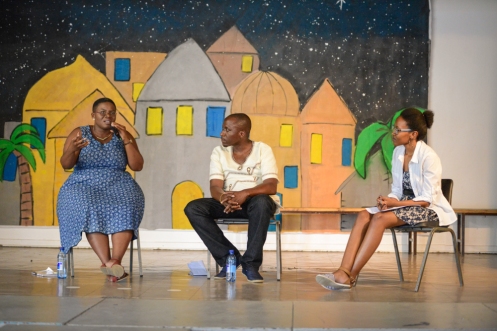 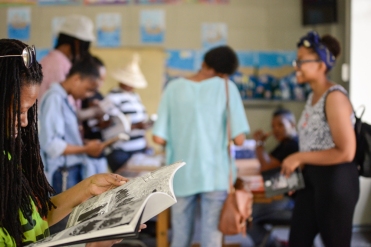 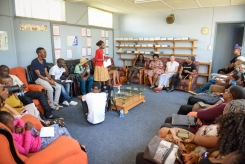 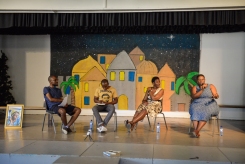