For over 17 years, Grammy Award winner Bunny Hull (songwriter of Patti LaBelle’s classic “New Attitude,” among others) has been conducting music and writing workshops for children.

Through her experiences, Bunny developed a highly acclaimed children’s book series called Young Masters Little Wisdom, and eventually mounted a one-time only performance piece called “Secrets of the Heart” based on the series.

Due to the strength of that performance, Bunny was offered a chance to apply for an Actor’s Fund program sponsored by Sony, which would guide artists to become “teaching artists” and enable them to write standards-based curriculum for California’s public schools.

Bunny knew participation in the program would give her a tremendous opportunity to assist in turning around the decline of arts programs in schools.

“Most school arts programs weren’t ‘programs’ anymore,” she told me. “They had become more of an after school activity, mostly centered on visual arts and a little bit of music. There was very little theater arts or dance. I felt a need to create something that would be more a part of every day curriculum and happen during school hours.”

Her application to the Actor’s Fund program was accepted. Bunny honed and refined “Secrets of the Heart” during the process and her instructor, Leonardo Bravo (Director of School Programs at the Los Angeles Music Center), recognized that the program was perfect for schools. He encouraged her to take “Secrets of the Heart” and make it the centerpiece of a series of arts workshops.

She heeded Bravo’s advice and those workshops have now grown into an non-profit organization called Dream A World Education, Inc. “Secrets of the Heart” has become a six-week residency program designed for class levels kindergarten through second grade.

The program uses music, dance, theater and visual arts to teach children about “the secrets:” friendship, kindness, imagination and gratitude. Additionally, and perhaps most importantly, the program assists children in connecting to the biggest “secret of the heart,” the unique and individual inspiration they have within themselves.

This past fall, I attended the first and last sessions of the most recent residency at Leo Politi Elementary School in Los Angeles.

At the introductory session, I watched Bunny and her team of artists use fun, rhythmic music and delightfully interactive storytelling to introduce kids to the concept that each one of them is a “young master.” Given today’s technological distractions, it was heartening to see that a traditional, live presentation could hold the rapt attention of nearly 200 five- to seven-year-olds.

The children’s reaction to the performers was so strong that they naturally imitated them, and truly reveled in placing a peace sign over their hearts and reciting the pledge, “I promise to use my gifts every day, in every way, for I am a young master. Peace!”

Six weeks later, I returned to see the culmination of at least 24 arts-based classes. The enthusiasm had doubled and the joy in the vast school auditorium was palpable.

With the help of “Secrets of the Heart” instructors, each of three classrooms had written their own song centered around friendship and smiling, expressed dance through the concept of kindness, written a story using their “magic eye” and created head-dresses that each child individually decorated with what they are personally thankful for.

It was fascinating to note the individual and natural artistic inclinations of the children. Some particularly came alive while singing their classroom’s song, and others seemed to enjoy participating telling part of a story, or explaining how they would “go inside” a painting.

One thing is certain: not a single child in that room was disengaged from what was happening.

This is not only attributable to Bunny and her team, but also the teachers and parents. Before a residency begins, Bunny does an individual workshop for both sets of adults. The purpose is to ensure that what the children learn during the six weeks is reinforced in the classroom and at home.

One of the biggest “Secrets of the Heart” champions is Leo Politi’s passionate and enthusiastic school principal, Brad Rumble.

Says Rumble, “Secrets of the Heart” helps children recognize their potential at a very early age better than any program I’ve ever seen. “Over six weeks, I watch my students develop self-confidence and begin to understand and appreciate their own uniqueness. The feedback from parents is also incredible. It is as empowering for them as it is for the kids.”

Rumble does not exaggerate. I was moved to see how the enthusiasm for the program extended to the parents. It was evident that they were heavily involved in the process and took it very seriously. Parents beamed with pride over vision boards made with their children. Each vision board was representative of the dreams they have for their families, and the values parents and children had discussed throughout the process of “Secrets of the Heart.”

Current funding for Dream A World Education doesn’t allow Bunny and her crew to do more than four schools per year. “I am currently looking for investors,” Bunny says. “Between that and fundraising efforts, I want to have a decent foundation in place so I can partner with more schools and grow the program. I’m doing so much of it myself right now, and I need administrative help.”

“Secrets of the Heart” is an invaluable program that reinforces the importance of the arts, and what it can mean for a child’s self esteem. All educators or potential benefactors who care about the arts in school should take the time to see the power of this program for themselves.

The next residency program is about to begin at Gardner Street Elementary School followed by Loyola Village Elementary; both in Los Angeles. The opening performance is on January 18th, 2012. For more information on attending, or to find out how to support Dream A World Education visit www.dreamaworldedu.org. To find out about Dream A World’s music and books visit www.dreamaworld.com.

Below is a photo of Bunny Hull with some of her “Secrets of the Heart” students, followed by an example of the vision boards families created with their children. 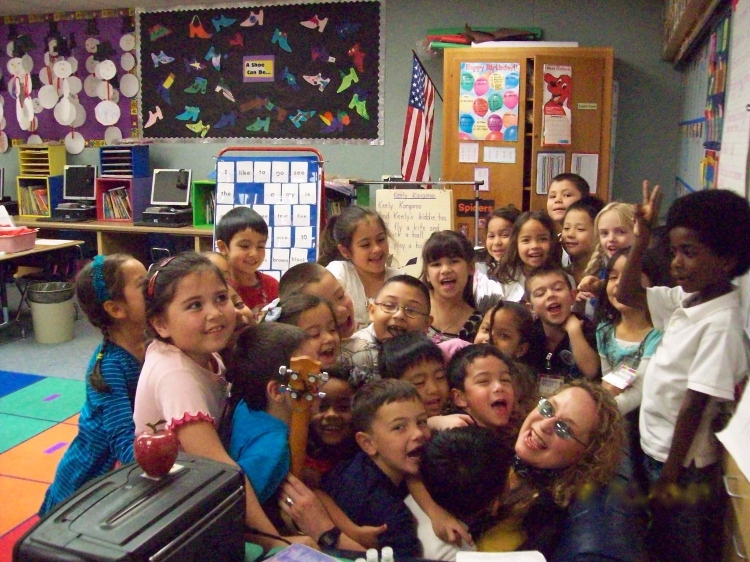 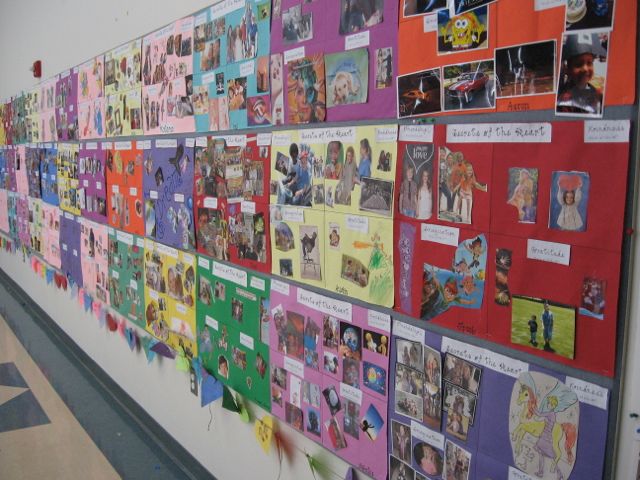