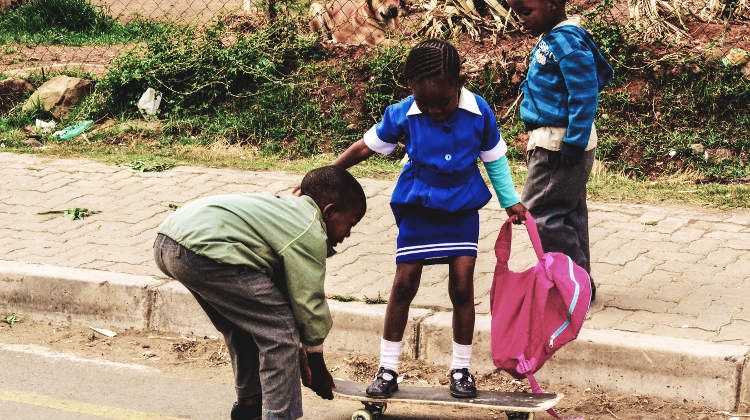 A small bunch of youth have revolutionised the norm and introduced skateboarding to the streets of Maseru, the capital of Lesotho; a small country completely surrounded by South Africa. The life of an average child in the rural parts of Lesotho consists of herding livestock (mainly for boys and sometimes girls) and tending to chores such as kneading bread dough and collecting firewood (girls). In the city, middle-class to high income offspring enjoy more modern privileges such as satellite TV, PlayStation, gadgets, mountain bikes and an array of malls (with a grand total of two thus far). Besides activities revolving around mainstream sports and academically inclined extracurricular programmes such as science or debate clubs, there is little else available for kids to occupy their time.

It’s a warm night in the middle of September. The national football team had just hosted Gabon in a tournament qualifier and energies were high. Flashing past the stadium gates after the match with bandana-covered faces, are 4 guys doing tricks and causing a stir among alcohol-saturated fiends. Random and rare always inspire intrigue! I introduce myself to the ringleader C-boi, exchange contacts and agree to a hang out with him and his crew (SOD: Skate or Die) some time soon.

Two weeks later on a brisk and dusty Wednesday, the sun’s gaze piercing through a coat of clouds spread across the sky, I meet C-boi and a mate, the rest of the crew is in their respective schools: “that’s one thing we emphasise, be in school yo! The only reason we’re here now is because our school resumes in January”, C-boi says with his board rested between us.

He tells me that skateboarding is a lifestyle they’ve adopted; “we wanna have it recognised as a legitimate sport in the country, we wanna have local tournaments and host foreign skaters because they have more experience to share. We want skate parks and better boards” C-boi went on to add that they’re trying to link with other skaters in solidarity and love for their sport and to grow a movement, “we have dudes, chicks and even kids among us, we don’t discriminate”.

Their boards are not the best quality and tend to break easily, they skate in worn-out shoes because their folks beef over them ruining their good shoes, but these and other challenges they face do not deter them. They skate in “Sea-point” a neighbourhood near the CBD that is semi-notorious for violence and lewd-behaviour, but they have clearly marked their presence in the 6 months or so since they started rolling around. “We even adopted the street and named it ‘skate-street’ and we meet regularly to try out new tricks we learned from videos on YouTube” C-boi tells me. 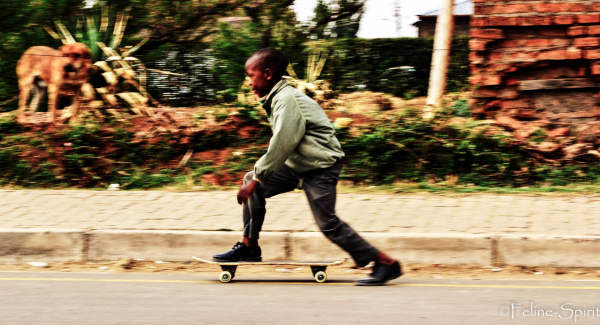 Gathering around us are kids ranging from 5 to 11, they are fascinated with the skaters and all want to take turns learning how to skate as well. They lie down on the boards and push each other through the street. I’m inspired by this because by daring to introduce an alien sport in their hood and passionately training themselves to get better, SOD is setting a positive example and motivating younger kids to aim at dreams they deem impossible. More significantly, they are adding a new spin to skateboarding by breaking the stereotype that it’s only for a select brand of youth. Totally wicked! 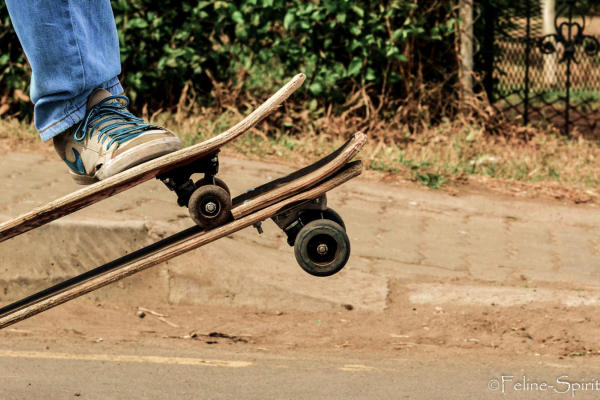