September 5-7, 2014 saw the beginning of a revolution in the politically tense mountain kingdom of Lesotho, with the re-birth of Ba re e ne re literature festival. Ba re e ne re means: “They say it was said…” (The equivalent of “once upon a time…”), and the concept was conceived by the late Liepollo Rantekoa who was a surge of artistic energy the country had been yearning for in the past half-century.

Liepollo spent most of her life in South Africa; living in Bloemfontein and Cape Town. Here she nourished her thirst for origination and creativity and acquired a wealth of skill and knowledge with regards to art and literature. She was humble enough to want to share that wealth with her people back home.

She created the Ba re e ne re literature festival in 2011, and invited the likes of Njabulo Ndebele, Kgosietsile Keorapetse and Lesego Rampolokeng to join her. The inaugural festival was a phenomenal success. Although she had plans to expand the festival to further enhance an appreciation for literature, the dream was stalled when a car accident tragically claimed her life in September 2012.

Her friends and family collaborated to continue her legacy by continuing the Ba re Litfest in her honour.

This year, a group of accomplished guests stepped up and took part, including Niq Mhlongo, Yewande Omotoso (Nigeria), Keamogetsi Molapong (Namibia), local writers and the Chimurenga team, of which Liepollo was also a part (sessions were broadcast live on Chimurenga’s www.panafricanspacestation.org.za).

The guests headed discussions on how to cultivate a new generation of readers and writers in southern Africa. They also shared wisdom on getting published, developing writing techniques and striving to get stories to be heard in an environment where written works are being less and less appreciated. 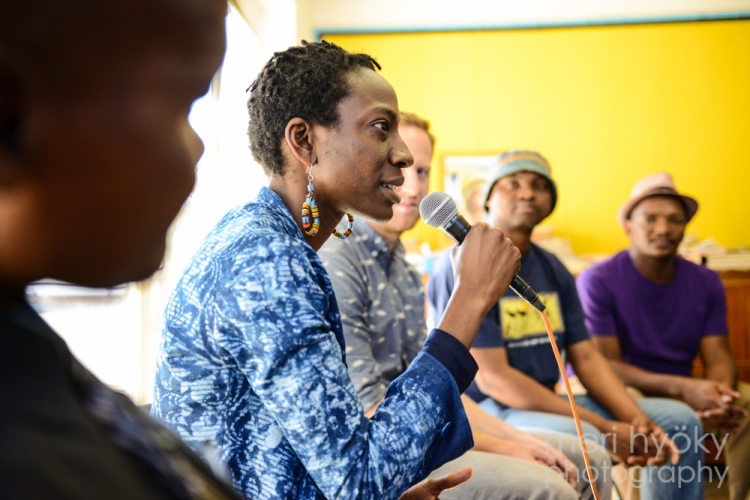 Yewande did a stellar job representing the female voice during the festival; imparting an independent, bold yet graceful African woman’s voice. She shared stories from her childhood; particularly on how the love of reading and writing was instilled in her and her brothers from an early age: “I remember writing my first ‘book’ when I was about seven years old,” she said, “it was six pages long and my cousin did the illustrations. Creativity was nurtured throughout our childhood.”

Much like Liepollo, Yewande spent most of her life living outside her country of origin (Nigeria) but never disconnected from her heritage, which she exalts through her Yoruba-style storytelling, referencing mythology and various characters from her first book Bom Boy.

Reflecting on what it takes to become established as a writer, Yewande said that writers need to have a heightened level of daring arrogance because otherwise it’s very easy to be turned away or worse, exploited! “Don’t trust your friends,” she added, “because they will not give you a fair and honest critique.”

Yewande further demonstrated that self-starting, driven, young, black women can make a career out of writing with focused discipline and tenacity. For example, she recently travelled to the University of East Anglia in Norwich in the UK after she received the Etisalat Prize for Literature; a fellowship lasting four months, where she joined members of the school of literature, drama and creative writing at the university.

It’s imperative that our stories be told, more-so that we tell our stories ourselves. We have an advantage now because technology supports us and a growing number of youth are venturing into imaginative careers such as creative writing, filmmaking, theatre and especially music. As painful as it is that Liepollo died so young, she will be remembered through-out Basotho history as the guide that helped reignite a passion for one of our most valued treasures as a culture… storytelling.

See more photos from Ba re e ne re by following this link.