‘Mamoshabesha Moshabesha is a 67-year-old woman who worked at Scott Hospital for 18 years as a nurse’s assistant. She is one of Morija’s hard-working women. She really played a big part in our society and is a role model to many women.

Moshabesha started working at Scott Hospital in 1991. She was motivated to look for work by the fact that she was struggling to feed her family and pay her children’s school fees. She applied to work at Scott Hospital and got hired. During her time at Scott Hospital, she noticed that many of the patients in the hospital became happy and cheerful in her presence. This is something that really motivated her at work.

Moshabesha had been diagnosed with sugar diabetes in 1983, but in 2002, the illness became more severe. This sickness brought many challenges to her life. However, she was able to overcome these challenges. She realised, on her own, that the work she was doing with patients was too demanding, so it was decided that she was to be moved to laundry to make bed sheets, pillowcases and curtains for the hospital. ”It was not tough work,” she says with a smile.

During her time with patients, she noticed that some of them were suffering from depression, but that this was being ignored by many of the nurses. She talked to her supervisors about this problem, and they then took action to address it. “The trust and love that I had with my leaders was great,” explains Moshabesha. “It gave me the opportunity to make them aware of problems that I noticed at the hospital. That really helped me to overcome such challenges.” With her work at Scott Hospital, Moshabesha was able to change her life and overcome hunger and other obstacles.

In 2009, she retired from her work at Scott Hospital. Now, she makes a living from home by selling flowers and doing small sewing jobs for other people. She continues to face challenges in her life as an entrepreneur as she does not have many customers. However, she is still moving forward and refuses to give up despite her circumstances. For now, she is surviving because of her sewing machine, her hard work and her passion. ”For people to overcome their problems, they should not keep their minds in jail,” says Moshabesha with confidence. “Let go of negative thinking and think positively. Going to school is not the only solution to problems that we face in life. People must open their minds and also learn to use their hands.”

”To the people of Morija and specifically to women: if they are hard workers life will be easy, but if they are lazy and do not work, their life will be hard,” she says fluently and emotionally. “They must feed themselves with faith and doubts will fade. They must step away from people who say that their dreams are impossible. They must listen to their hearts!” 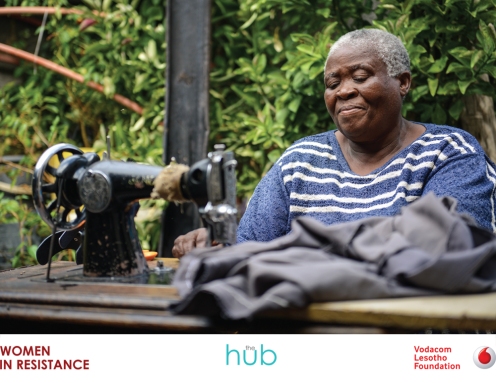 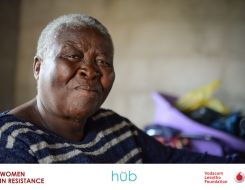